The process of drying thin strips of meat originated with the Native Americans, who stored it for consumption during hard-to-hunt seasons when food would be sparse. Beef jerky is lightweight, easy to transport, and full of protein. So when Settlers from Europe made their trek to the New World, they learned and adopted this process.

When it comes to old-fashioned meat cooking, you must consider Robertson’s. It opened up its doors in 1946 in a humble building. At the time, they were only able to cook 15 hams for the local community. In the 1950s, they started advertising their meat products on local billboards and quickly saw increased business.

They continued to expand as the demand for their products increased. One of the reasons that they credit their loyal following is due to their process. They don’t rush the smoking process. Instead, they do it the old-fashioned way and just smoke the meat for a long time.

In 1976, the company started to invest in its own niched focus of beef jerky. By allowing part of the business to branch off and remain focused on a single product, they’ve refined what beef jerky should be. Calling it ‘Real Beef Jerky,’ this product was a hit from the start.

The company has expanded its borders and now serves numerous customers in various states. If you’re thinking of trying out ‘Real’ beef jerky for yourself from Robertson’s, here are a few reasons why you should.

A big part of the reason why they call their beef jerky ‘real’ is because of the process in which they make the jerky. Once the meat comes into the store, it’s cured and seasoned. It’s then left to rest for about a week.

Once it’s thoroughly cured, they take the meat and slice, smoke, and package it. For their beef jerky, they sometimes are even hand-rubbed to help get the moisture out of the jerky, so it can dry effectively.

When it comes to the smoking part of the process, hickory wood is used. This is because they believe that hickory wood offers the best kind of flavor.

Also, in keeping with their process from the old days, they choose to smoke their jerky for a long time. Not only does this help make sure that the jerky is dried thoroughly and will preserve well, but it also adds a ton of flavor to the meat.

Beef jerky that is only smoked for a short time may have its surface laced with flavor, but the smoke doesn’t always permeate into the thick center of it. As a result, you’re left with a mediocre strip of jerky that just doesn’t hit the spot.

Robertson doesn’t use this excuse. Instead, they ensure that every slab of meat that enters their facility is high-quality. That way, they’re sure their customers can bite into the jerky and experience a mouth full of delicious flavor with every strip.

They also only use lean meat. This provides the right kind of structure and flavor that you would expect when eating beef jerky.

When you buy jerky elsewhere, you often only get a small amount inside of a pouch. You may even have to pay a ridiculous amount for the small portion. That isn’t what Robertson offers.

Instead, they give you a huge tub of beef jerky. The slices are thick and long and can easily keep you full no matter when you’re eating them. For those who only need a smaller size, however, they also offer a smaller portion.

Beef jerky is a convenient and portable snack that’s popular for outdoor adventures. It’s also low in carbohydrates. Hikers, hunters, campers, and fishermen appreciate that it doesn’t require refrigeration, has a long shelf life, and takes up little room. Beef jerky makes for a great snack at home, on the road, or even packed away in a lunch box.

Beef jerky fits well with many contemporary eating plans. It’s gluten-free and high in protein. Jerky is also a quality snack for people watching their starch intake, as it typically contains less than 5 carbs per serving.

Protein is an important building block for your body. It’s used by all systems: muscle, bones, nerves, and blood. It’s not stored for later use, so beef jerky provides a portable way to fuel your protein needs.

Besides being a good source of protein, beef jerky provides dietary zinc and other nutrients. Beef jerky made in the United States is subject to high-quality food standards and is often lower in fat and sodium than imported jerky.

Meat snacks are generally modest in calories compared to the nutrition they provide. Protein, zinc, and vitamin B-12 are found in animal proteins. These components are necessary to keep the body functioning in an optimal manner providing energy and replenishment of blood, bones, and muscle.

Hungry travelers can stretch their legs and get a tasty snack at one of their six franchise stores in Oklahoma and Texas, as well as at the factory store in Marietta. Although real beef jerky is only one of the products produced by Robertson’s, it’s their flagship product.

Not only is real beef jerky sold under Robertson’s label, but it’s also distributed under other names.

Love’s Country Stores requested a trial run in a few locations in 1976 after a representative visited the Robertson smokehouse facility. The trial was such a success that Robertson’s beef jerky is today branded at Love’s Country Store Beef Jerky and is sold in all of their 125 stores.

Robertson’s has made a success of their family business because they continue with a time-proven method. They select quality lean meats and use a slow smoking process to produce real beef jerky.

So, in short, if you think Robertson’s might be something you’d like to try, look for labels that reference Robertson’s Ham, or the Choppin’ Block, their other trademark. 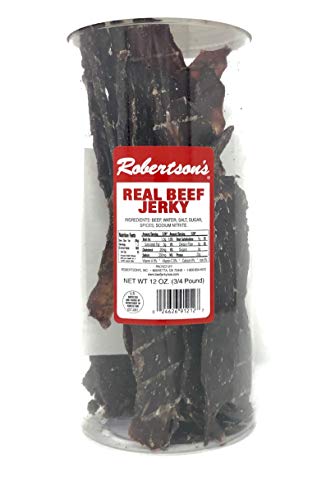 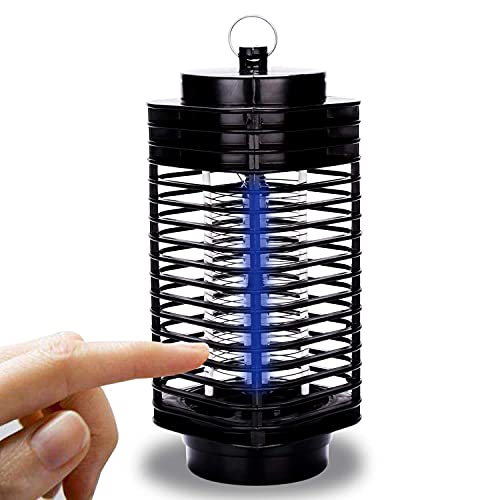 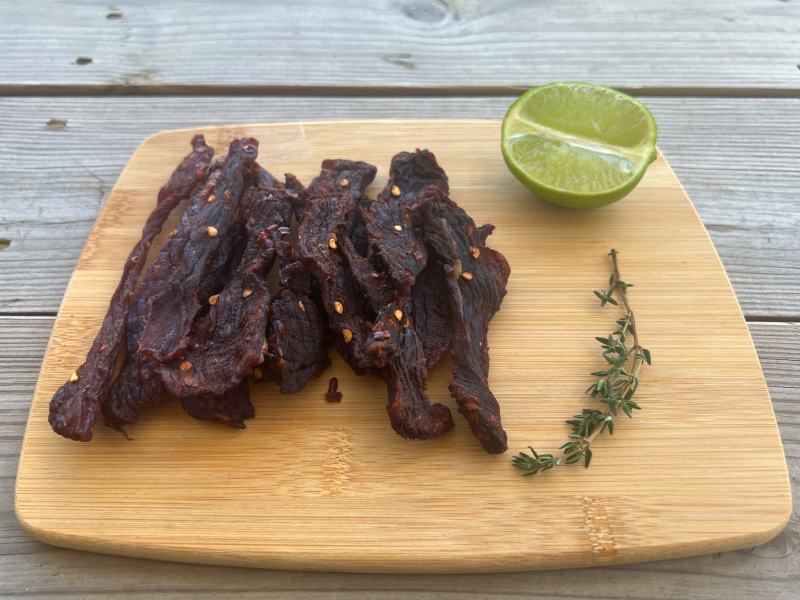 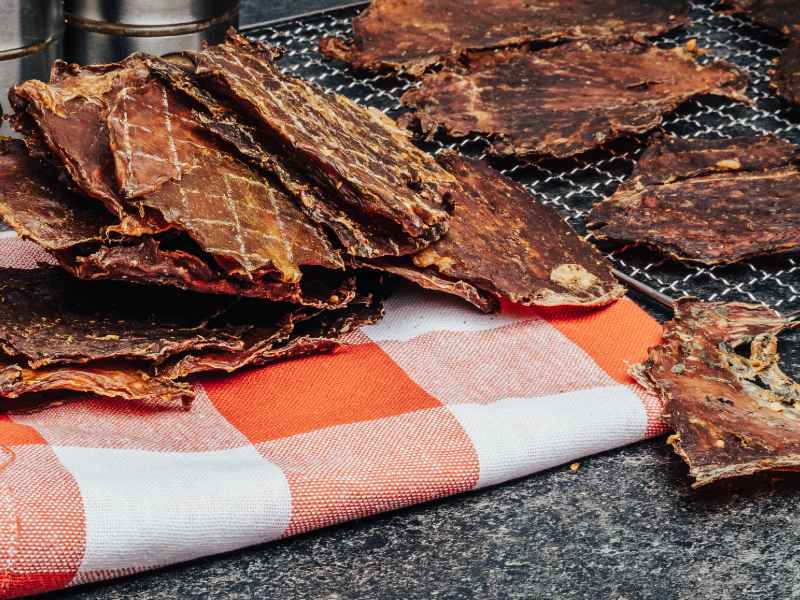 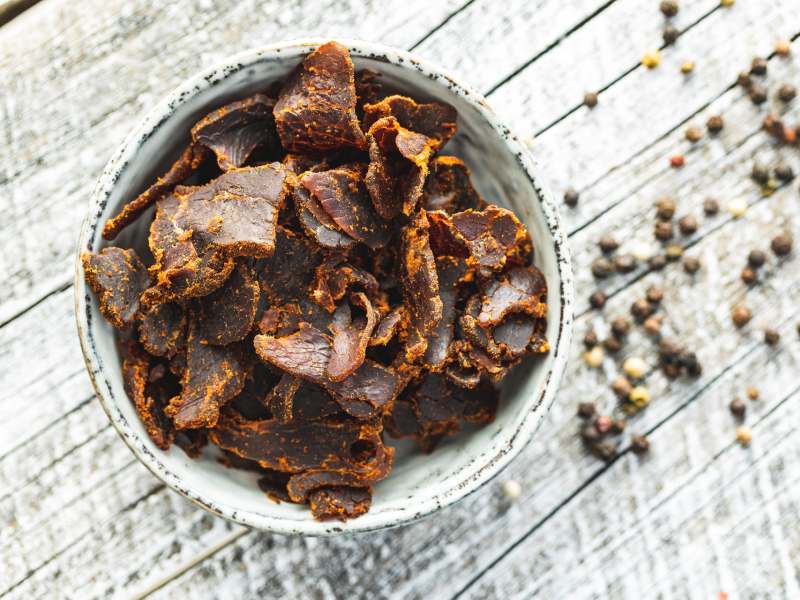 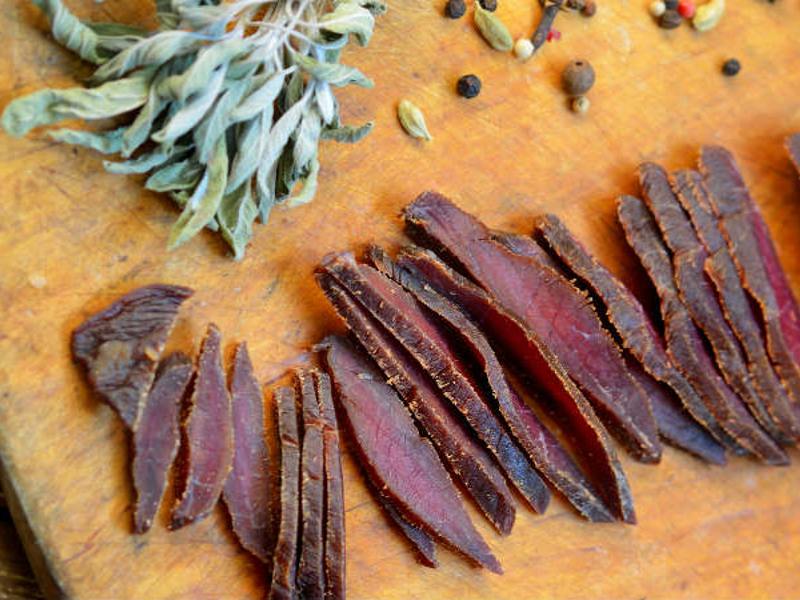