Consuming beef jerky can be an expensive habit (click here for why). This article reviews 15 trending beef jerky products to determine the average price of beef jerky per ounce. After fully reading this article, you’ll be able to make a more informed consumer purchase the next time you see jerky on sale.

Now Let’s Break It up According to Quality

For further consideration, we’ll split the list (which appears below) roughly in half, separating them by price.

We’ll see how the average price changes when we separate the products.

When we take the seven most expensive brands on our list and average their cost per ounce, we get an average price of $2.90.

When we do the same for the eight least expensive brands, we get an average figure of $1.31 per ounce.

This data indicates that you can save significant money — more than 50% — by avoiding the supposed higher-end beef jerky brands. 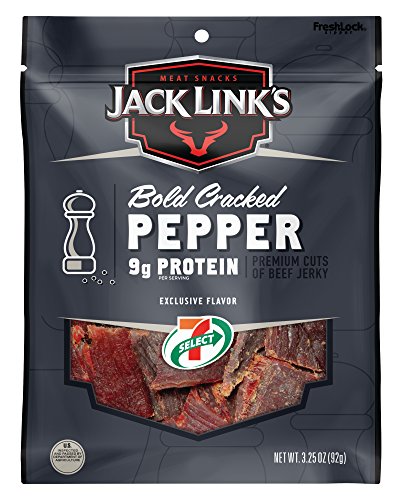 This is a heavily peppered variety, which is sold here in a value pack. For about $35, you get six packages containing 3.25 ounces each. This means you’re paying $1.79 per ounce.

CHEAPEST PER OUNCE OF THE 15 PRODUCTS REVIEWED. 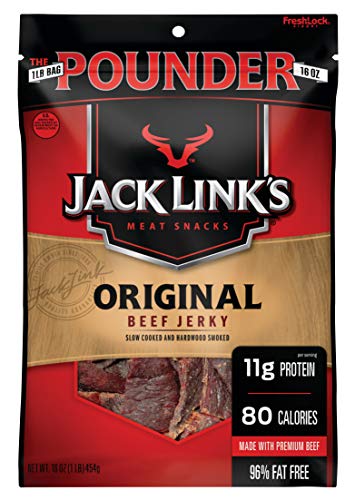 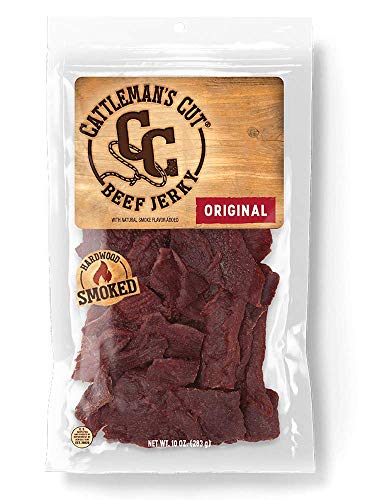 Cattleman's Cut Original Beef Jerky, 10 Ounce
Usda steak marinated for over 24 hours and slow cooked for a tender bite; Clear bag because the handcrafted quality speaks for itself

Cattleman’s cut is another well-regarded and commonly available brand. This one is not fancy, like our previous choice. It’s great for those who just want plain beef and nothing else. 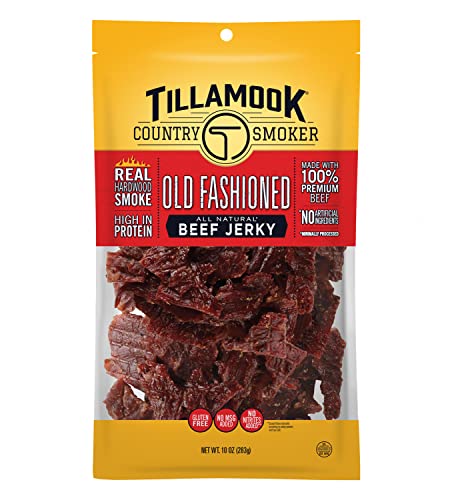 The best thing about this jerky is that it has no preservatives or unnatural ingredients. This makes it more like homemade jerky, but with a longer shelf life. 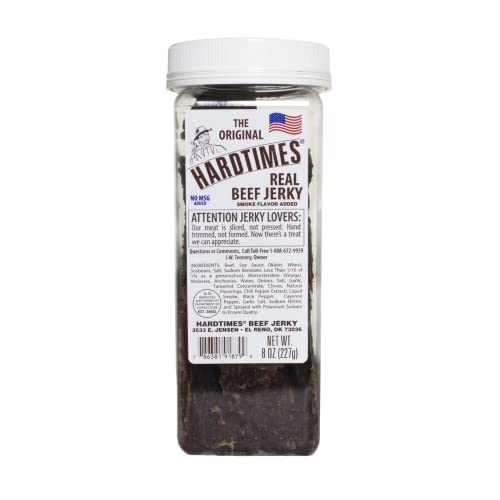 As the name implies, this brand is meant for long-term storage. It comes in an 8-ounce resealable jar, which is bound to increase its shelf life. I can see how this brand might be a good thing to put into a backpack for a long hike. 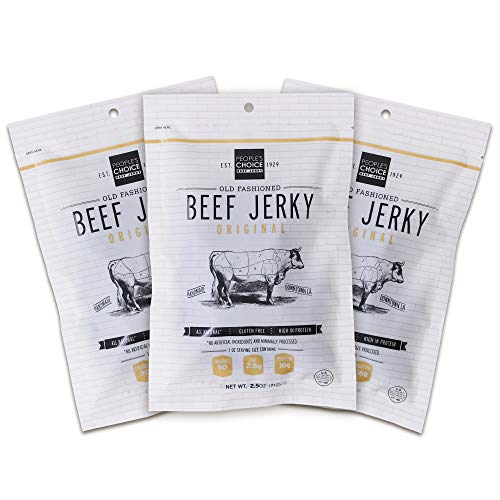 This one is meant to be a healthier choice. It has no sugar, no carbs, no gluten, and nothing unnatural at all.

MOST EXPENSIVE PER OUNCE OF THE 15 PRODUCTS REVIEWED. 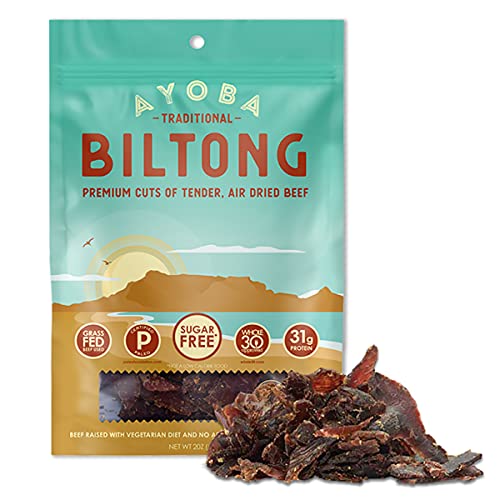 Biltong is a traditional African style of beef jerky. Instead of being dried in an oven, biltong is air-dried for 14 days. Obviously, the hot climate of Africa aids the process considerably. This brand is made from only grass-fed beef so it’s entirely natural. 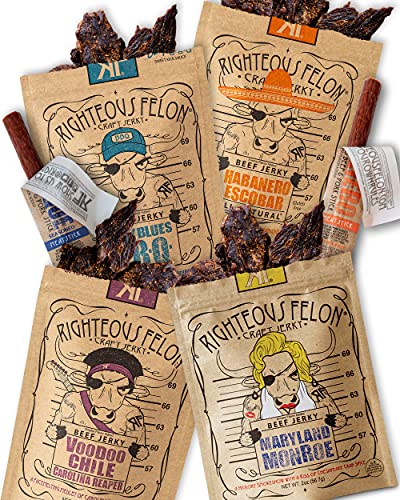 This brand has an edgy name and a cartoonish label. The different sub-types have cool names like “Habanero Escobar” and “Chipotle Guevara.” 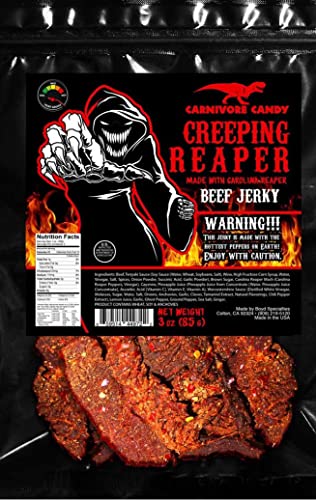 This is some of the hottest beef you could ever want, as it is made with ghost peppers. If you like serious heat with a little sweetness, this is a good one. Just be aware that the ghost pepper is considered by many to be the world’s hottest pepper. 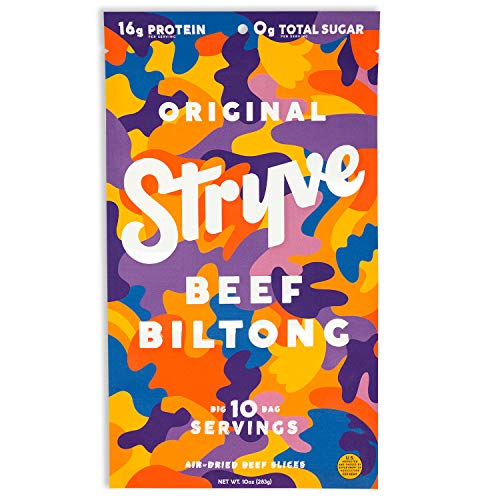 This is another example of African-style beef jerky, which is softer than oven-dried jerky. Thankfully, this one is a little cheaper. 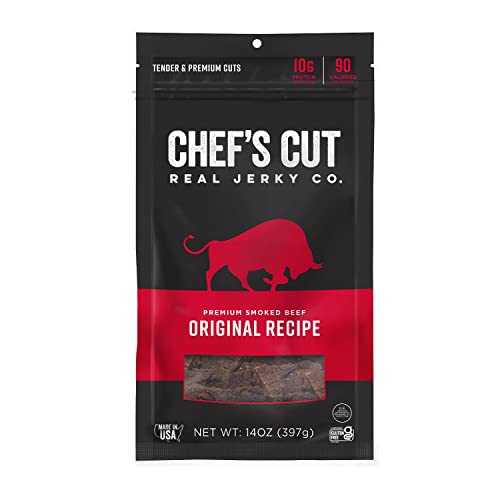 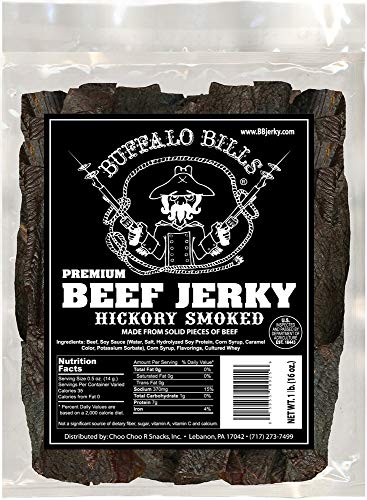 If you like that old-school hickory taste, this jerky delivers, and its price isn’t too bad. And it’s made from very lean meat. 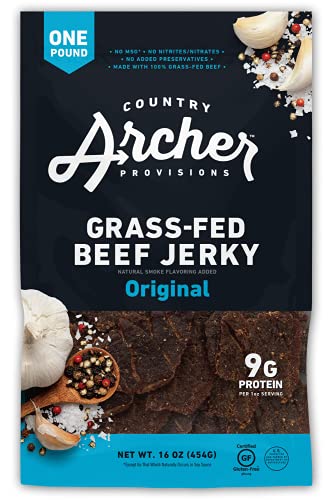 This is great hiking fuel and provides energy as a priority; it’s also well-seasoned. 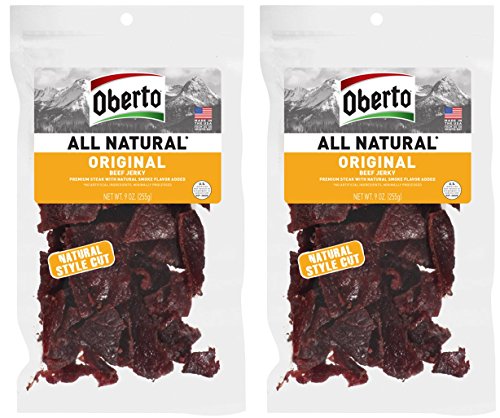 When they say “all-natural,” what they mean is that this jerky is just meat and nothing else. This can be very good if you’re using the jerky as travel food because plain meat goes with anything.

This is some of the softest and most flavorful beef around. It’s a little expensive but well worth it in terms of quality.

When we take all 15 products and average them, we get $2.08 per ounce. Considering how little an ounce of beef jerky is, we’re looking at a somewhat expensive food.

Those of us who like beef jerky can take solace that there are cheap ways to feed your meat tooth. When you consider the cost of beef, the cost of jerky seems quite reasonable.

It should be noted that beef jerky prices have been on the rise recently due to increases in the costs of production, which are largely the result of changing regulations in farming practices, rises in the costs of beef, and inflation. These prices could change a lot in the coming years.

Since beef jerky can last a few years in storage, perhaps now is the time to stock up on the good stuff.

If you’re interested in a better perspective on the differences in cost between store-bought and homemade beef jerky, watch the below video.

How much are you paying on average for an ounce of beef jerky? Are you paying less or more than what we’ve cited above? Please share in the comments below.

3 thoughts on “What Is the Average Price of Beef Jerky?”