When it’s time for a savory snack, beef jerky is hard to beat.

The smoky flavors and chewy textures are simply addictive. And with so many varieties available, from umami teriyaki to spicy pepper to sweet honey, you can’t help but want to try them all!

But is all that beef jerky hurting your health?

Or are there nutritional benefits to be had from this meaty treat?

Read on to learn everything you need to know about the nutritional value of beef jerky.

Beef Jerky Nutrition at a Glance

The exact nutritional values of beef jerky will vary by brand, flavor, and even the cut of beef used in the recipe.

But we can get a general idea of beef jerky’s nutrient composition by looking at the U.S. Department of Agriculture’s FoodData nutrition database.

According to the database, a typical 1-ounce serving of beef jerky contains 116 calories, 9.4 grams of protein, 7.3 grams of fat, 3.1 grams of carbohydrates, and 2.5 grams of sugar.

Now let’s take a closer look at what these numbers really mean for your health.

How Many Calories Does Beef Jerky Have?

On average, a 1-ounce serving of beef jerky provides 116 calories worth of energy or about 5% of a 2,000 calorie-a-day diet.

But if you’ve had beef jerky, you know how tough it is to limit yourself to just one ounce. Realistically, the average serving size is closer to 1 cup, or about 3.2 ounces.

As far as snack foods go, beef jerky is relatively low-calorie, especially when you take into consideration the other nutrients it provides.

And it’s easy to find jerky varieties made with leaner meat or lower-calorie marinades. Some types contain as few as 60 calories per ounce, so you can snack away without worrying about your daily calorie count.

How Much Protein Does Beef Jerky Have?

Every person’s protein needs are highly variable depending on age, weight, sex, activity level, metabolism, and many other factors. But experts at Harvard Medical School recommend a baseline intake of 0.8 grams per kilogram of body weight — or 0.36 grams per pound.

For these hypothetical people, a typical 1 cup serving of beef jerky provides around 50% of their daily protein — just in one snack session!

It’s easy, then, to see why beef jerky is such a popular snack among those with high protein needs, such as athletes, people with chronic illnesses, and those with highly physical jobs.

How Much Fat Does Beef Jerky Have?

Beef jerky contains around 7.3 grams of fat per ounce, or 23.7 grams per cup. But figuring out what that means for your health involves a bit of calculation.

Fat can be either saturated or unsaturated, with saturated fats considered less healthy that unsaturated fats. The exact fat composition of beef jerky is highly variable — in some varieties, saturated fat comprises 50% of the total fat content, while in others, it’s as low as 20%.

The USDA doesn’t place an upper limit on total fat intake but recommends that saturated fat intake be limited to 10% or less of your daily calories. If you’re on a 2,000 calorie diet, this equates to 22 grams or less or saturated fat per day.

That’s a pretty hefty chunk of your daily limit, but it’s also a worst-case scenario: most beef jerky varieties contain a lower ratio of saturated to unsaturated fat.

And if you’re serious about watching your saturated fat, try branching out! Jerky made with other types of meat, such as buffalo or turkey, can contain no saturated fat at all.

How Many Carbohydrates Does Beef Jerky Have?

Beef jerky is generally low in carbohydrates: 1 ounce contains 3.1 grams of carbs, and 1 cup contains 9.9 grams.
The USDA recommends that those on a 2,000 calorie diet consume between 225 and 335 grams of carbs per day. A serving of beef jerky barely puts a dent in that amount, so those on low-carb diets can snack without worry.

With that said, most of the carbs in beef jerky come from sugar used in the marinade. If you’re trying to watch your carbs, look for low-sugar or sugar-free jerky — some sugar-free varieties contain 0 carbs.

How Much Sodium Does Beef Jerky Have?

By far the unhealthiest thing about beef jerky is its sodium content. Curing the meat requires the use of salt, and lots of it — and marinades often contain salt-heavy ingredients like soy sauce as well.

With an average sodium content of 505 mg per ounce or 1,600 mg per cup, beef jerky is notorious for its high sodium levels. The recommended daily sodium intake is 2,300 mg or less, so that cup of beef jerky will constitute 69% of your sodium allowance!

Excessive sodium intake can lead to heart disease, high blood pressure, and an increased risk of stroke. High sodium levels can also damage the kidneys, and there’s evidence that they contribute to osteoporosis and even cancer.

Thankfully, there are many low-sodium beef jerky varieties available. Some contain as little as 100 mg per ounce — that’s 80% less sodium than the average beef jerky!

How Much Cholesterol Does Beef Jerky Have?

So that serving of beef jerky could very well put you over the limit if your other meals are heavy in meat, eggs, and dairy. Keep an eye on the rest of your intake on days when you eat jerky, especially if heart disease runs in your family.

What Minerals Does Beef Jerky Contain?

Beef jerky is a great source of zinc, a mineral that’s key to cell regeneration and immune system functioning: 1 ounce contains 2.3 mg of zinc, while 1 cup contains 7.4 mg. It’s recommended that men get 11 mg of zinc per day and women get 8 mg, so you could easily get most of your daily zinc from your jerky snack.

It’s also high in bone-strengthening, heart-regulating phosphorus, with 115 mg per ounce or 368 mg per cup. 700 mg of phosphorus a day is recommended for adults.

So Is Beef Jerky Healthy For You?

It may not be as healthy as, say, a salad, but its high protein and mineral content make beef jerky one of the best options you’ll find in the snack aisle. It’s relatively low in calories as well, so those who are trying to watch their weight can munch without worry.

The most worrying component of beef jerky is its sodium content — it’s one of the highest-sodium foods out there. But as society becomes more health-conscious, more and more low-sodium jerkies are coming on the market, and it’s easy to reduce the sodium content at home if you make your own jerky.

Overall, beef jerky can be a delicious and nutritious treat, especially for those who need extra protein or want to avoid the high carb content of many other snack foods. As with everything, moderation is key, so stick to smart serving sizes and enjoy your jerky!

Is Beef Jerky Bad for You? (Video) 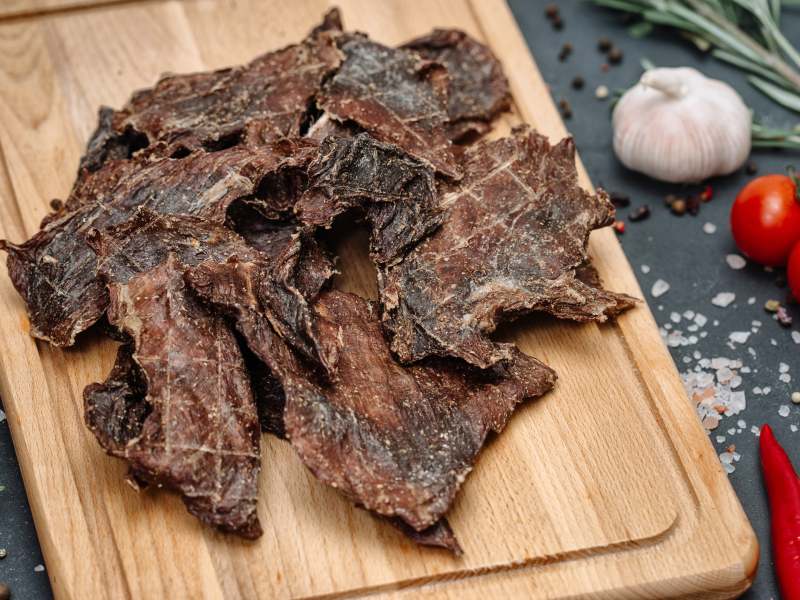 1 thought on “Nutritional Value of Beef Jerky: Is It Good for Us?”