In the world of jerky, beef gets all the publicity, but it’s far from the only option if you want amazing jerky.

And as hunters, locavores, and adventurous eaters may know, deer or venison jerky is one of the best alternatives out there.

Tender, tasty, and loaded with protein, deer meat makes fantastic jerky that can convert even the most diehard beef lovers over to team venison.

But as with all types of jerky, it’s essential to use the right cut of meat and prepare it correctly.

Let’s find out what part of the deer is best for making venison jerky — and learn how to prep each cut to perfection.

Venison Cuts for Jerky: The Good and the Bad

Whether you’re making jerky from beef, venison, or any other type of meat, the leaner, the better. Fat in jerky tastes weird, has an odd texture, and makes the jerky spoil faster — unless you trim it, which is time-consuming and often tricky.

That’s why venison is so good for making jerky. Deer meat, regardless of cut, is naturally lean, so you can technically use just about any cut and end up with quality jerky.

With that said, some cuts are still better than others in terms of price, taste, texture, and ease of preparation. Check out our top recommendations… and learn which cuts just aren’t worth it.

The 4 Best Cuts of Deer for Jerky

Sadly, venison neck often goes to waste: it’s either discarded or ground up into oblivion, stripping it of all its unique qualities.

But with a little time and trimming, this huge cut of meat can become a huge batch of delicious venison jerky.

The main challenge when working with venison neck is the silverskin. This thin, sinewy layer becomes excessively tough and chewy when cooked, making your jerky unenjoyable or even impossible to eat.

Therefore, you’ll need to be thorough about trimming the silverskin from your venison neck before making jerky. There may also be some excess fat to trim depending on the time of year the deer was killed.

But once the trimming is done, you’ll be left with a large amount of meat that’s perfect for jerky and may otherwise go unutilized. Reducing food waste and gaining jerky: it’s a win no matter how you slice it!

This lean cut lies between the hindquarters and ribs of the deer. Its thinness and relatively small size often cause it to be overlooked and ground up with the rest of the “less-desirable” cuts.

But venison flank shouldn’t be considered waste: it makes excellent jerky! It’s highly flavorful, thin, and easy to work with — all winning qualities for homemade jerky.

Flank is excellent for those who prefer to make their jerky in smaller batches. If the thought of processing and eating a whole top round’s worth of jerky overwhelms you, give flank a try: you’ll be able to prep it (and consume it) in no time at all. 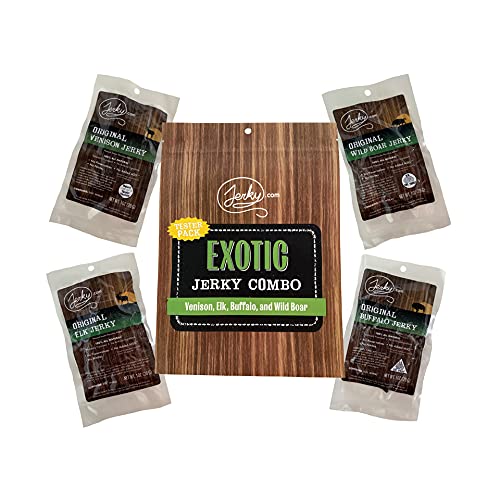 Venison-shoulder is often written off due to its toughness and relatively small muscle size. But if you like your jerky chewy, it’s a highly economical option that makes good use of an otherwise underutilized cut.

Shoulder’s biggest downside is the amount of silverskin that needs to be removed before making jerky. Leaving the silverskin on may ruin the texture of your jerky, so take the time to remove as much of it as possible.

Although venison shoulder jerky can be too tough for some people’s taste, you can soften it considerably by allowing for a nice, long marinade before dehydration. Acidic and sugary marinade ingredients are especially effective at making the meat more tender, so add those flavor boosters and be patient — the end result will be well worth it!

Pretty much all hindquarter cuts — top and bottom round, eye-of-round, sirloin tip, and rump roast — are ideal for making venison jerky.

The large muscles from the hindquarter are extra-lean, so they yield a ton of jerky with minimal trimming. If you’re purchasing your venison from a grocer, butcher, or hunter, you’ll find that these cuts provide the best bang for your buck (pun intended!)

Our favorite of these cuts is the top round. It’s a huge cut that’s evenly textured with virtually no gristle, sinew, or fat, so almost no trimming is needed.

Top round’s clean grain makes it very easy to work with when preparing jerky. You get very fine control over the angle and thickness of your cuts, so you can make perfect slices that wouldn’t be possible with other cuts.

If top-round isn’t available, try bottom-round: it’s very similar to top-round, but it tends to be smaller. Because venison loses as much as 75% of its weight during dehydration, we prefer using top-round when possible to increase our jerky yield.

The 4 Worst Cuts of Deer for Jerky

Also known as the loin (not to be confused with the tenderloin), venison-backstrap is found along the length of the spine. It’s supremely tender and juicy, which makes for jerky that’s highly flavorful and enjoyable to eat.

However, the backstrap is the filet mignon of venison: pricey, coveted, and perhaps better eaten as a steak rather than dehydrated into jerky. Any jerky you make with this cut will be delicious, but many people feel that such a precious cut is somewhat wasted in jerky form.

So make your venison jerky from a different, less valuable cut — and then snack on it while you prepare your glorious backstrap steak!

The tenderloin is a pretty small cut — small enough that it’s often left behind by hunters who feel that the effort required to remove it from the deer just isn’t worth it. Those who collect it prize it for its incredible texture and rich flavor… and charge a premium to anyone wishing to sample it.

If you do manage to get your hands on some venison tenderloin, you can treat yourself to a small batch of some of the most tender, flavorful jerky you’ll ever taste.

The key word there, though, is “small”: there simply isn’t much meat there, and what little there are shrinks considerably during dehydration. You’ll spend a lot of time and/or money on just a serving or two of (admittedly delicious) jerky.

As with the backstrap, the tenderloin is simply better off lightly cooked and eaten as an entree, where its juiciness and tenderness can truly shine.

Shanks come from the legs of the deer, close to the joints. This means that they’re loaded with silverskin, connective tissue, collagen, and bones — none of which makes for very good jerky.

Thus, shanks require a lot of work to become suitable for jerky. And when you’re hankering for a snack, trimming and deboning are the last things you want to be doing.

Do yourself a favor and throw those shanks in a slow cooker — a nice, slow braise softens all that tough tissue and brings out the best flavors. Then satisfy your jerky craving with a more substantial cut that’s easier to prepare.

Depending on the size of your deer, using ribs for jerky may be a moot point: often, there’s very little meat on the ribs, so you’d only end up with a small handful of jerky after all your hard work.

But even if you do obtain some substantial ribs, processing them into suitable strips would be so time-consuming and labor-intensive that it simply wouldn’t be worth the effort.

Additionally, depending on the time of year the deer was killed, the ribs can be some of the fattiest parts of the entire animal. Nobody likes fatty jerky, so save yourself the trouble and use a bigger, leaner cut — like any other part of the deer!